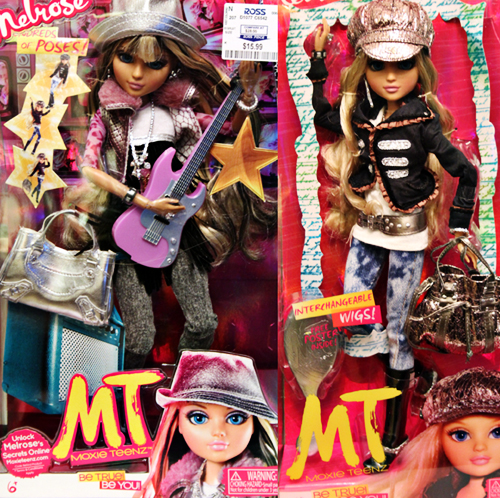 These are the Moxie Teenz's I picked up last weekend.  I got the second one at Toys R Us for $1 less than Ross thanks to a comment by Georgia Girl.  Both are the Melrose version.  After opening the guitar version and fiddling around with the doll I really wanted to modify the body.  I was this close to cutting a good inch out of her thighs and lower legs before I decided against it.  My thought was to make her into a "plus sized" doll verses the thin stature of a 1/6 doll.  My reasoning was that if she were shorter, she would look fuller. 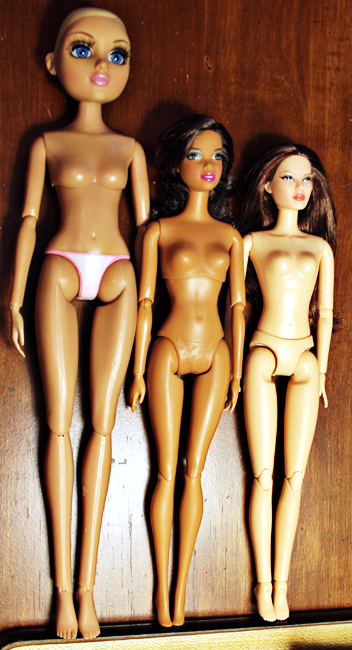 However, the more I played with her the more I really liked that she was so tall.  She does not have a pivotal waist or knees.  She has what I would call a single knee joint versus the double knee a Liv.  So, her knees bend 90 degrees compared to the 45 degrees a Liv can achieve.  Her boobies sit lower on her chest (which pivots) than a 1/6 doll.  Her neck knob is also very tight and close to the neck opening so there is limited range of head motion. 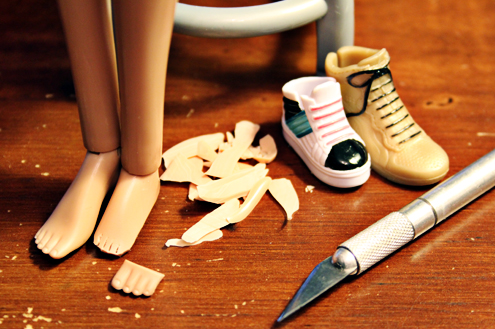 Although I saved her legs, her feet however, were another matter.  I have exactly 4 pairs of Moxie Teenz shoes and I'm not about to start hunting more up.  Therefore, surgery was required so that she can wear Liv shoes.  Her original shoes will still actually fit, but now she has more to chose from. 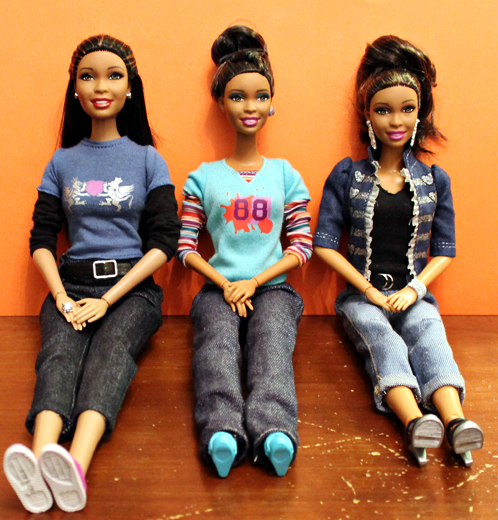 How she compares sitting down.  The oversized play line Barbie heads fit well on a Moxie Teenz body and seem totally in proportion to their larger size.  The neck knob was thick so I cut mine in half horizontally.  Her compatriots have had their heads shrunk.  Middle body is an I Can Be with articulated arms, but just bendable knees.  Last body is a Liv. 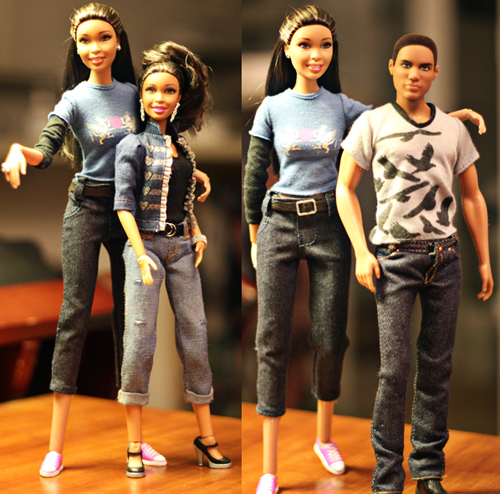 Comparison standing next to a Liv and my tallest male.  When I looked at the Toys R Us Moxie's, they had a single male version, Gavin.  Much like Liv's only have Jake, I guess.  Unfortunately, I didn't think he was worth the cost.  If I see him for $7 then maybe I'll get him.  One thing that put me off was that his chest was so freaking enormous that I would have to make all his clothes!  Forget that! 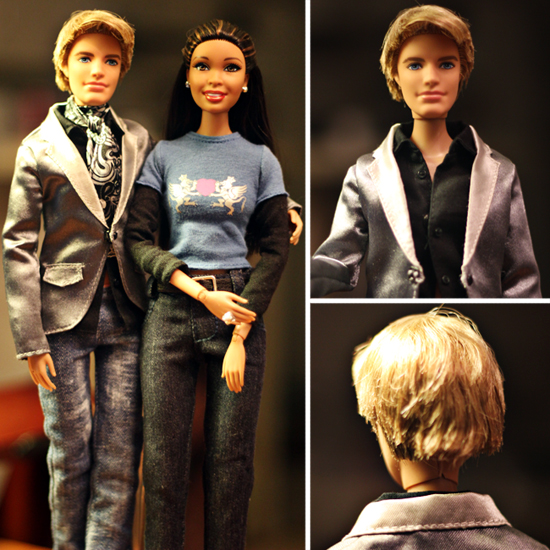 I'm not a Frankenstein for nothing though, so I attempted to turn my other Moxie into a male.  I gave the body a slight chest reduction and rudely spliced a Ken head to make it slender enough to fit the neck.  Unless "he's" going to be wearing an ascot at all times, the smaller neck size makes him look kinda sickly.  Longer hair would give the illusion of a thicker neck though.
I probably wont go through with this operation because to make this work, I would have to reduce the breasts all the way which would leave holes in the torso plate.  I find that rather unappealing.  Sure I can fill the holes, but then the torso wont pivot.  I would also need to reduce the size of his hips for a better fit of male clothing.  I may come back this, but who knows. 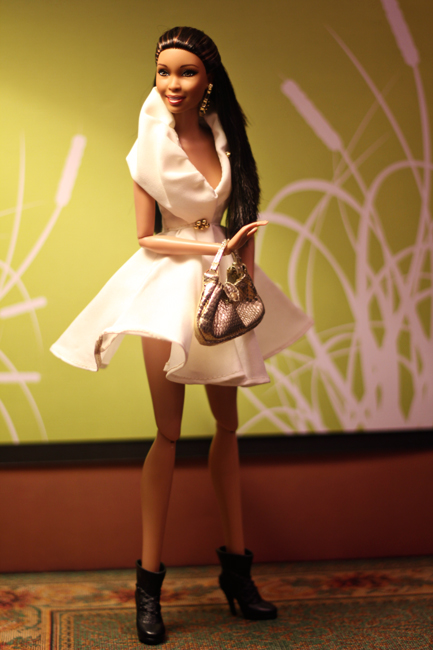 This is my favorite discovery about Moxie's.  They can wear a lot of the clothes my mom made!  Yay!  Their hips are way too big and legs too long for the pants, but most of the fitted bodices with flared skirts fit just fine. 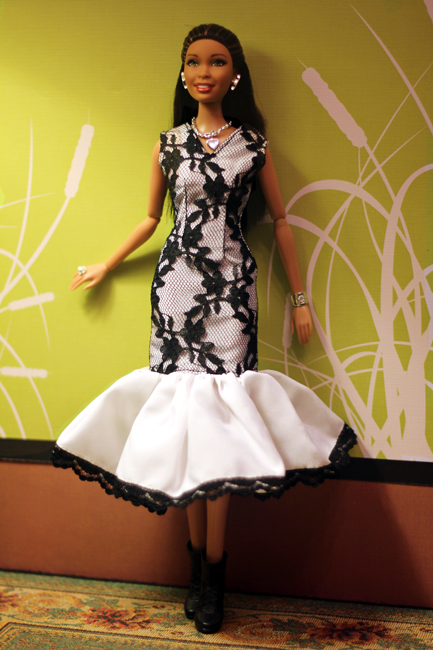 My mom's hip hugging clothes don't fit as well, but as long as I don't turn her around to show that her booty is sticking out, it's okay, lol. 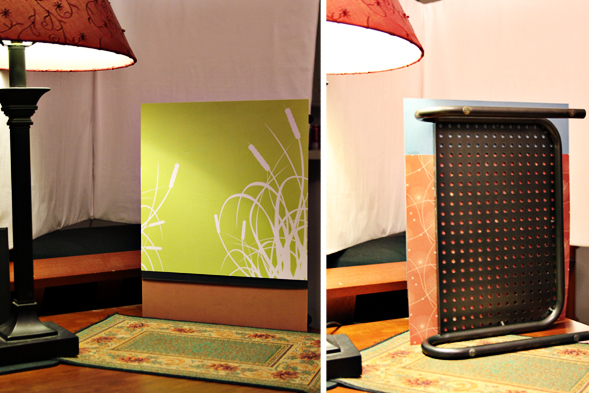 Behind the Scene: Front and Back
Not much to this single walled dio.  Not really even a dio.  I taped 3 pieces of scrapbook paper together and tapped them to a metal PC monitor stand.  The light above me is a 200 watt chandelier and next to the dio is my 150 watt desk lamp.  Carpet is a dining matt.
Stuff to Know