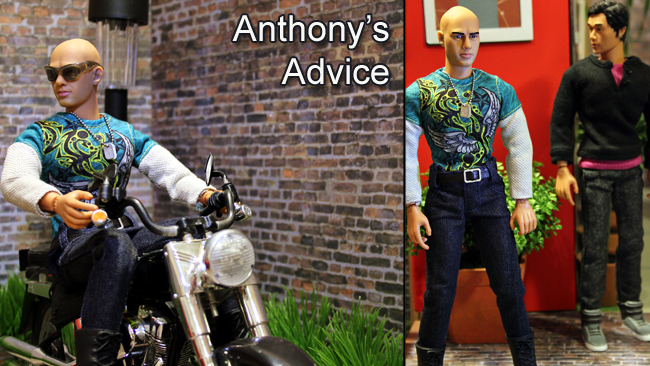 2 months ago.
It's moving day at 227N.
"Hey, guys," Tasha says.
Kevin and Anthony have arrived to help Tasha settle into her new place.
"Let's unload Tasha's ride first and then I'll bring my truck over with the heavy stuff," Kevin suggested.
"Aww, man, can't we eat first?" Anthony grumbled. "I'm starving."
Tasha shook her head, "You and your stomach. Why didn't you eat before you came?"
"Because I thought you were gonna feed me. You have food, right? Tasha? Girl, I know you hear me."
"Keep moving, Rodriguez," she responds. "You'll be fed later."
"Later?" Anthony repeated. "How much later? Tasha? Answer me, girl."
Moving continues but Anthony is soon distracted from his quest for food.
"Why, hello there," he drawls.
"Ut oh," Tasha tells Kevin. "Your boy is on the prowl again."
"If there's a girl in a one mile radius, he'll find her."
"So," Anthony says to the blonde. "You live around here? Are you married? Got a boyfriend? What about cats? You like cats?"
"Are you serious?"
"Totally. We should go out. You free right now? Wait. Where you going? Can I come too?"
"No, you cannot!"
Anthony stares after the departing blonde. "She left me. What went wrong? Didn't she feel the attraction between us?"
"What is wrong with you?!" Kevin and Tasha ask simultaneously.

Later on...
"Yo," Anthony called out. "There's only one more box left. Can't we take a snack break before we handle the heavy..." He drops the box he was carrying. "Uh."
Kevin thinks, "Oh, crap," while Tasha gasps. "Are you for real?! Why'd you do that," she demands.
"Err. Oops?"
"I'll 'oops' you!"
"Oh, snap," Anthony cries as he runs. "Dang, girl, it was an accident! Kev, help me out, man!"
"He won't save you!"
After catching Anthony and getting her revenge, they return to the scene of the crime.
Tasha informs Kevin, "I'll get the last box if you'll make sure this one cleans up his mess."
"Got it."
She walks off while Anthony thinks, "So bossy," but Kevin thinks, "So beautiful."
Anthony shakes his head as he watches Kevin stare at Tasha as she passes by.
"You fool. When are you going to bite the bullet and tell her you want to be with her?"
"Shut it. And I'm not telling her."
"Adopted by your dad or not, she's not really your sister. You know that, right?"
"Again, shut it."
Anthony raises his hands in resignation. "Alright, it's your love life... idiot."
Tasha lifts her head at the sound of fist hitting flesh.
"Ow, man! Why you so violent?" Anthony foolishly seeks sympathy in the wrong place. "Tasha, Kevin is being mean to me!"
"Good. You probably deserve it." Her words are harsh but inside she thinks, "Heh, lovable goof."
"Yeah," Anthony mutters. "You two are perfect for one another."
Moving continues...
With a particularly heavy piece of furniture, Kevin asks Anthony, "You got it?"
"Yeah, I got it. You got it?" He snarks back.
"Smarty pants. Just walk."

Almost everything is inside and soon it will be time for a well deserved break.
"Kev, seriously, let me say one thing - without you hitting me!"
Seeing Tasha in the doorway, Kevin halts Anthony before he can continue. "Hold up."
Delivering the last of the furniture to Tasha he returns to Anthony and sighs, "Okay, let's hear it."
"Almost two years, man. That's how long she was with that a-hole. Years of you feeling like crap every time he looked at her - much less touched her."
Kevin remained silent knowing that Anthony's words were true.
"Is that how you're going to live the rest of your life? Watching other guys come and go, knowing it should be you by her side? Step up, man, or one of these days you'll be hearing her kids call you uncle... instead of daddy."
Kevin gives Anthony a solemn look and promptly punches him in the arm.
"Ow, man! You said you wouldn't hit me!"
"Wrong. I never said any such thing. But seriously, dude. Thanks for the advice. I appreciate it."
"Stuff your thanks! My arm hurts. You probably broke something."
"Poor baby."
Anthony notices Tasha sneaking up on them. "Heads up. Incoming."
"Yah!" Tasha jumps on Kevin's back and hangs on. "What are you guys talking about?" She glances suspiciously between the two.
Anthony replies with a tweak of her nose, "That's classified, twerp."
Tasha moans in annoyance at their secrecy. "Ugh!" She jumps down. "Okay, fine, don't tell me. Anyway, the pizzas are here. Unless you guys want to stand around yakking some more."
Anthony pushes his way between them. "Not me! Get out the way. I'm hungry."
Tasha grabs Kevin's hand and begins pulling him toward the door. "C'mon before he eats everything." Feeling resistance she comes to a stop. She turns to him with a curious gaze.
Kevin asks, "After Anthony leaves can you and I talk for a bit?"
"Of course, but, what's the matter? Is it something bad?"
"No, it's not. At least I hope you won't think it is."
"Tell me!"
"Later."
"Hmm."
He begins to pull her toward the door but this time she stops him. "No matter what you have to say, you know that I love you, right?"
"I know. Same here." He thinks, "She's so sweet," as he stares at her intently. Finally he says, "Let's go inside."
_____________________
Behind the Scenes:
Holy crap this video was almost 15 minutes and I still didn't shoot a beginning scene situated in the present that would have introduced this particular segment.  Time management is apparently not my thing but I got it down to 8 minutes without losing any of the photos.  So, if the pacing seems off or too fast - oh well, that's what the pause button is for, lol. 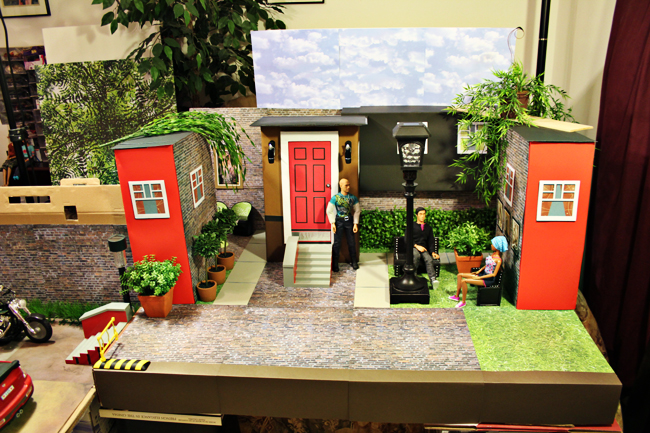 To give me more wide angle photo room, I added a walking path to the front of the complex. I kept the box my Barbie Estate stuff came in and covered it with the scrappaper. I also made a sky board using paper from Joann's and Handi Tak'd it to foam board. I made a tree board too, but that paper came from Michaels. I haven't used foam board in any projects before, because it costs money. However, I've run out of free cardboard and boxes! 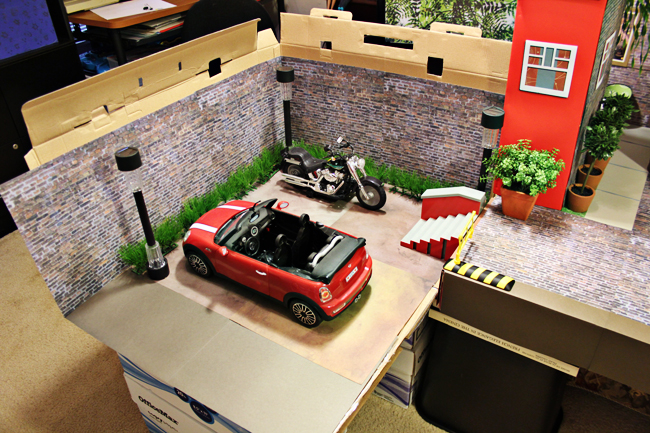 I really wanted a scene of them taking boxes out the car and moving stuff but I had no more room on the bed so I built a parking area off to the side. It's bare bones, and I didn't have enough matching paper to pose as concrete, but overall, it's pretty cute!

I may have another video or two within me because I would like to wrap up their story in a nice neat bow, but dang, videos take a lot of time - at least the way I'm doing it, lol. Maybe I can do one once a month, or heck, once a quarter, but we'll have to see, so please don't count on it.

Some bonus photos of Kevin and Tasha: 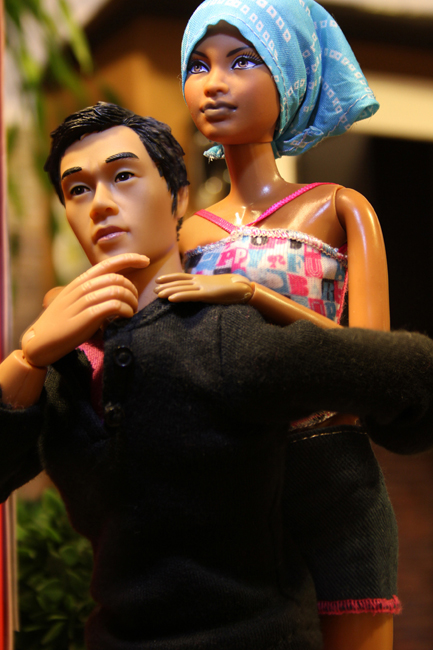 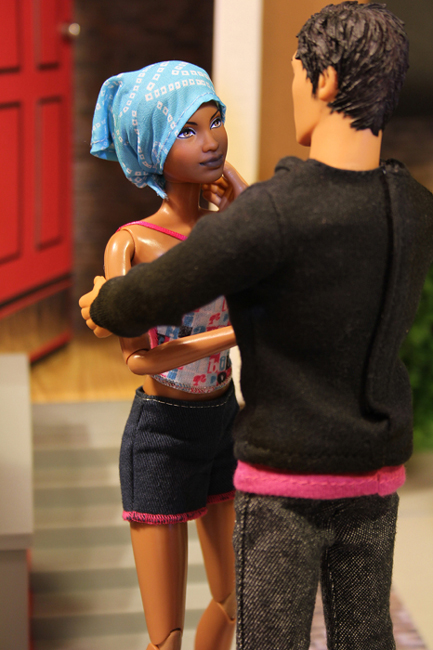