I've got some complaining to do.

First of all, the new blogger bot system is beyond annoying.  Many times I have to make three attempts before it will post a comment.  I've noticed that if your blog is set for comment approval you don't have to do the bot thing.  However, I don't want to switch because often times it could take me a few days to get to my blog to see what's happening.  So, I guess I'll make my visitors suffer along with me, lol.

Duct tape from Dollar Tree... why does it stink so bad!  I tried to make some quick chairs out of cardboard and duck tape and it was a fail on many levels.  Because of sinus issues, I'm smell sensitive.  After all that cutting and taping I finally had to trash what I was doing because the odor was too much for me.  I do have some black duct tape that is about 15 years old.  It's harder and sticker to work with than the newer tapes that you can just rip with your hands.  The plus side though is that it doesn't stink.  So, even though my crafting this weekend was a bust, I won't give up. 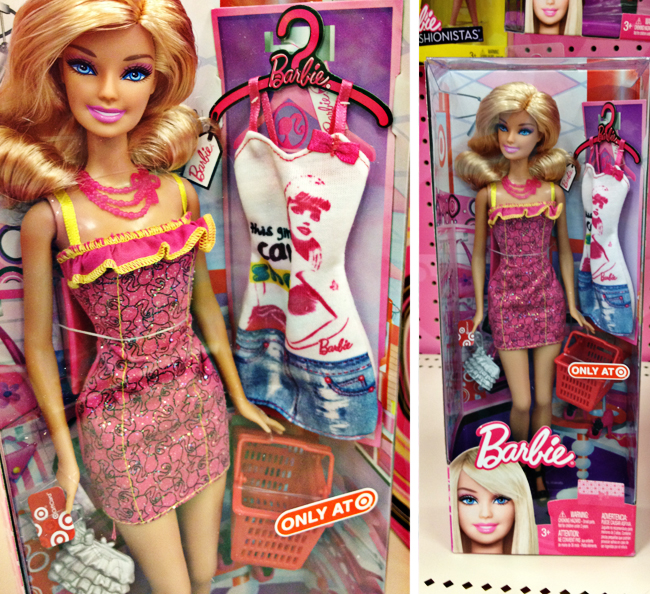 "This girl can shop"  $11.99 at Target
I love the outfit that she isn't wearing because it's fresh and graphic.  The one she has on, however, is so not my taste.  I know the play line is intended for kids, but just because you play with dolls doesn't mean that everything has to sparkle or be pink.  The glitter gets everywhere and if you don't wash your hands or wipe down every surface after touching it, then you will eventually have glittery poop.  No one needs glittery poop!
Posted by Muff at 12:34 AM 15 comments:

I was in a crafty mood this weekend.  I was off Friday and pretty much spent the next two days just making stuff.  From the beginning it was my intention to make a diorama and do a little story showcasing what I had made.  However, I spent so much time crafting and designing the set that I'm too pooped for a story.  Instead, I'll just say, "Welcome to Tasha's Place." 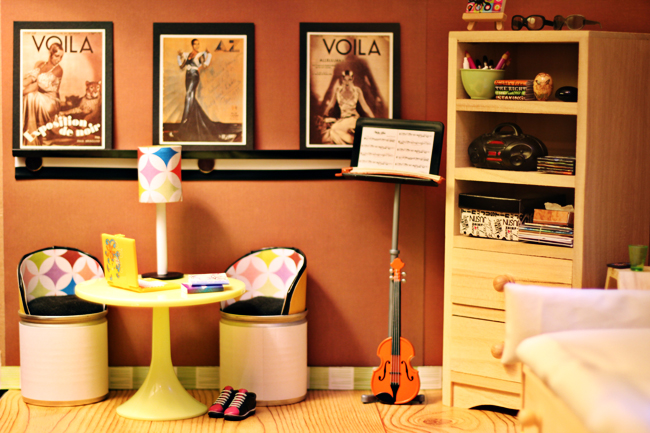 In this photo, what I made was the chairs, lamp and wall shelf.  The chairs are vienna sausage cans that are stuffed with cotton balls and a sock.  The chair back is a piece of cardboard covered with black tape and scrapbook paper.  The wall shelf is a piece of folded copy paper with black tape for accent with magnets holding it up.  The lamp is a thread spool on top of a straw that is wrapped with copy paper.  If you bought the mini cooper, there were little black things underneath the wheels.  The black bottom of the lamp is one of those pieces. 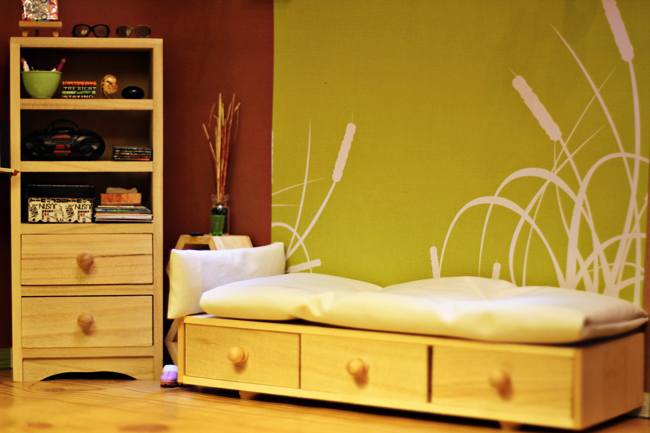 Here I made the cushions and the exterior unit of the bed/sofa.  The drawers are extras from the book case and can be removed.  The bed is fully constructed so it doesn't need the drawers to remain upright. 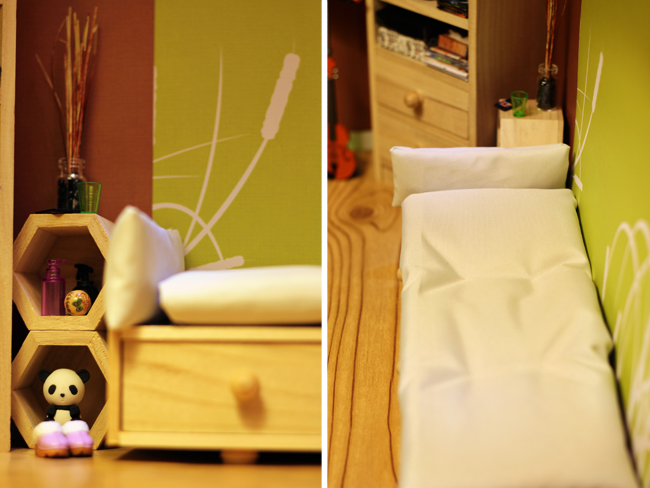 All the wood is from Michael's including the little stacked side tables.  Each one was 9 cents.  That's not a typo so I don't know if they were marked wrong or what.  The cushion is a brown piece of vinyl turned inside out and sewn around a piece of foam. 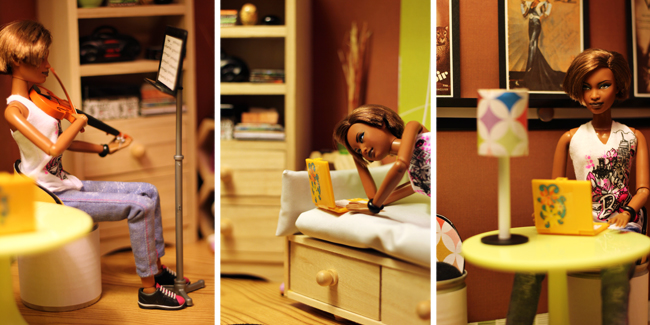 This is Tasha hanging out in the living room.  She's a music major in college.  The violin is something her dad wants her to be serious about but she's a rocker chick at heart.  However, since her dad pays for her college and apartment, she makes sure she practices.

Behind the Scenes
I think this is going to be my dio setup from now on.  I've tried different stands to use as walls, but this large piece of packaging cardboard works easiest.  I only ever have 2 walls.  If I had three then I would have to bust out extra lighting and I hate that.  My desk lamp and the chandelier above me cast sufficient light.  I was using magnets to hold up the wall paper, but now I'll just use the Dollar Tree lamps as clamps.  That way, they are useful even when they burn out.  Everything is sitting on top of an old swivel TV stand that is 19x20 inches.  This gives me way more space than what I had before and it's portable. Also, since it swivels 360 degrees, I don't have to move around to photograph stuff anymore.

The Extras
Flooring is contact paper from Dollar Tree
Baseboard is ribbon from Michael's
Area rug is a mouse pad
Wall paper is scrapbook paper from Big Lots
Table, laptop, shoes, cup and green bowl are Liv
Little easel and bear are erasers
Books and dvds on shelf were made by me
Music stand and violin are Moxie Teenz
Box on shelf and phone are Justin Beiber
Josephine Baker artwork is mounted onto scrapbook paper
Everything else is Barbie
Posted by Muff at 9:03 AM 15 comments:

I was organizing my boxed dolls and that single clutch Fashionista box was totally clashing with my multiple Basics' boxes.  So, I decided to unbox the Fashionista and discovered that it's got a boo boo!

One of her knees is out of wack.  I could see before I opened it that something was wrong with the angle of her leg.  Why I didn't notice when I bought it I've no idea.  The pivot that inserts into the leg is warped and there is a big gash in the top of her knee.  I couldn't see the gash while she was packaged because her knee was bent.  I bought her months ago at Target when their Fashionistas were $8.99.  There's still time to return her, but I'm going to keep her instead. 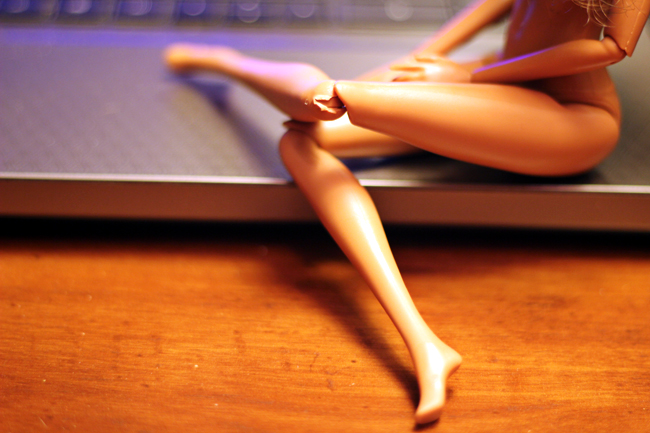 I have had surgeries and knee troubles myself and nobody got rid of me, ^_^.  So, I will just work this into the background story of whichever doll ends up with the body.  One of my dolls is a sports physical therapist and this doll can be in the same field or even a patient.  I usually put a little ace bandage around articulated Barbie knees anyway when I want them to stand.  She'll just be the only one with a bandage on whether she's wearing pants or a skirt.
Posted by Muff at 1:37 AM 8 comments: 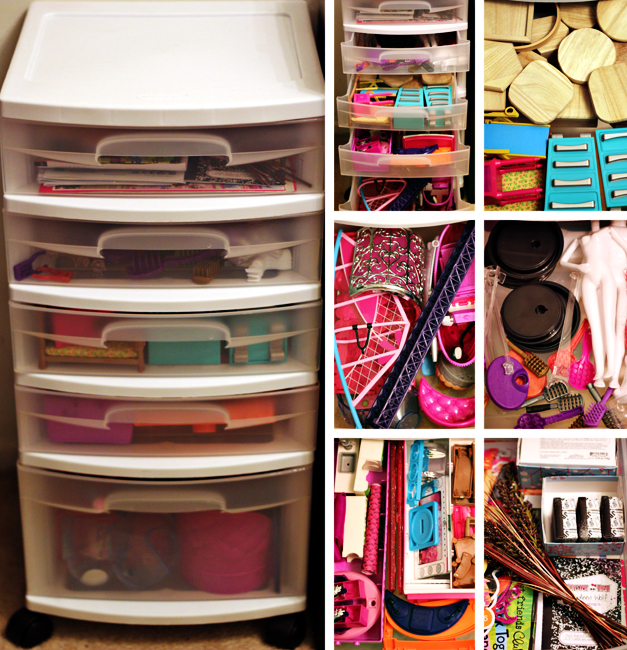 There is a thrift store that I have to pass on my way home so I check it once a week to see if they have any dolly stuff.  They never do but this last time I finally found something I wanted!  This cart was in perfect condition.  It didn't come with the wheels and they don't really fit.  The wheels will just fall out if I pick up the unit... so I wont pick it up, lol.

The only problem I had with it was getting the price off it ($7.99).  This place must have a problem with people switching tags so they use markers to put the price on stuff.  I would have paid $25-30 for this at Walmart so I'm very happy at finding it.  I like keeping my doll stuff organized, so the more storage the better.
Posted by Muff at 8:54 PM 15 comments: