Check out the Barbie post (linked below) at the HouseBeautiful website to see larger photos of these older houses.

A Look Back At Barbie's Dreamhouse Through The Years While I think that the 1979 A-frame is probably the most innovative structurally, if I could only choose one, I would like to have the 1974 version. The décor reminds me of how crafts looked when I was growing up. I feel nostalgic just looking at it.


Dialog and Images from Video:

"You probably can't tell from the video, but my fingertips are pretty dry. But after I run them though this dolls hair a few times, they now have a shine to them. I'm going to try some things to get rid of the oily residue applied by the manufacturer.

First attempt will be with regular dish detergent. I will not be trying shampoo and conditioner because mine come with various oils in them anyway. But I will be giving baking soda and vinegar a try. I don't put any water on the hair first. I just slop the detergent on it. I smoosh it in real good and then comb it through. I left the detergent in for 15 minutes before rinsing it out in cold water. My dryer has a cold setting so I'll use that to speed this up. The hair is completely dry, but still looks wet. It also still feels oily. That didn't work, so onto the next thing.

I'll be using a small bowl, the doll (of course), baking soda and vinegar. Spread the baking soda evenly throughout the hair. Next prop or position the doll so her head will rest in the bowl. I put the vinegar in a smaller cup just to make it easier to pour. Put in enough vinegar to reach her hair line but don't let it cover her face. Let the hair stay in the solution until it stops fizzing, which might take 3 to 5 minutes. Press the hair into the liquid to make sure it gets all the strands. Unless you are used to touching vinegar and baking soda, you should wear gloves to do this or you'll feel a burning sensation on your tips. Once it stops fizzing, rinse the hair out in cold water. It still looks wet once it's dry and it still has an oily feel to it, BUT not as oily as when I started.

I want to try one more thing. Boiling Water!

Stove on high. Pot of water. Comb doll's hair so it's hanging upside down. Let water come to a full boil and then turn stove off. Once it stops boiling and is just simmering, it's ready. Submerge the hair into the water up to the hair line and don't let the water go over her face or let her body touch the edge of the pot. Count to 10 and pull her out. My camera was at a bad angle, but you should have seen the amount of oil that spread into the water. Maybe 3 fresh dips into hot water would have done the trick, but I think I've done enough to this poor doll. 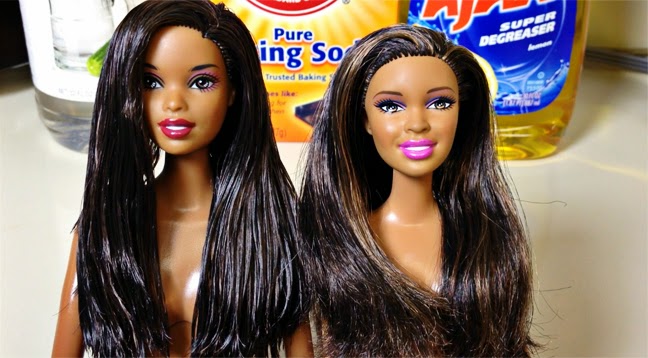 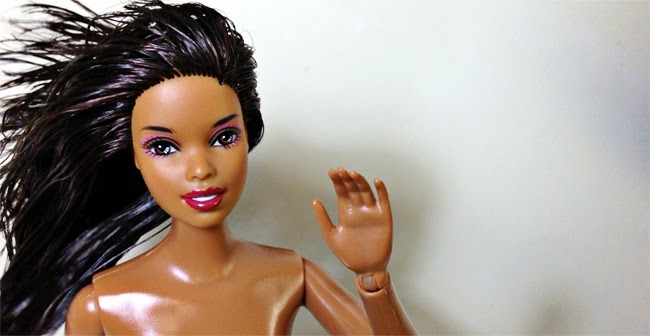 Final thoughts. Dish detergent did nothing. Baking soda and vinegar had some effect, but not much. The boiling water did have an immediate impact but I think you'd have to dip it multiple times to see a significant reduction in oil."
Posted by Muff at 10:36 PM 55 comments: 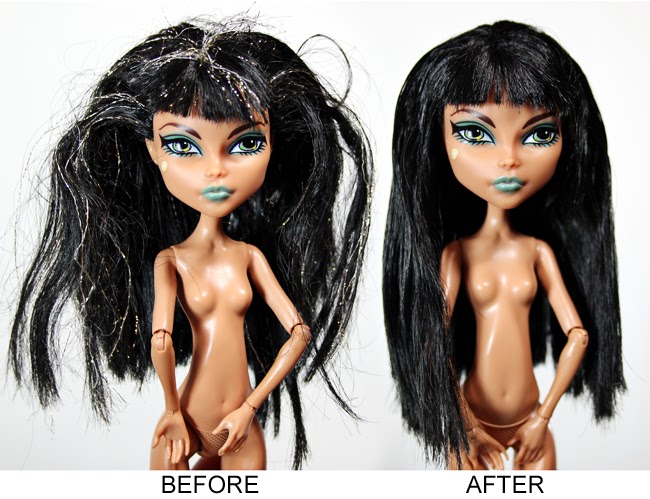 "I found a couple of Cleos at the thrift store and they both had tinsel strands that I wanted to get rid of. This one though had really greasy hair and it was hard to pull the strands out.

Regular needle nose tweezers didn't work well on this hair but they worked fine on the other doll. Even when I could get a grip on the hair, it would split the strand and then be even harder to yank out. So frustrating!

I gave up on the needle nosed and tried these angled tweezers to see if they would work any better. Cool! They have a tight grip and pull the hair out easily and fully. I also tried pulling out the hair with just my fingers to see if that would be quicker. It didn't really work and left fuzz right at the root of the scalp. Oh, well, back to the tweezers. 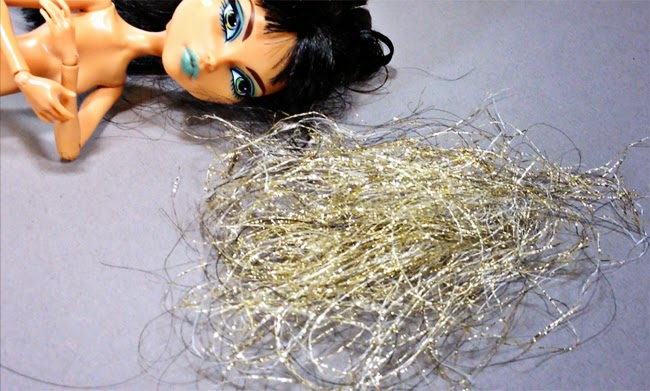 It was very slow going, but it did get the job done thoroughly. Glitter free after 20 minutes. Time to condition! [Using Pantene Co-Wash] I probably should have done this before I started and maybe her hair wouldn't have been quite so greasy. Too late now, but I'll know for next time. I let the conditioner stay in for at least 15 minutes, but more if the hair is particularly jankie. 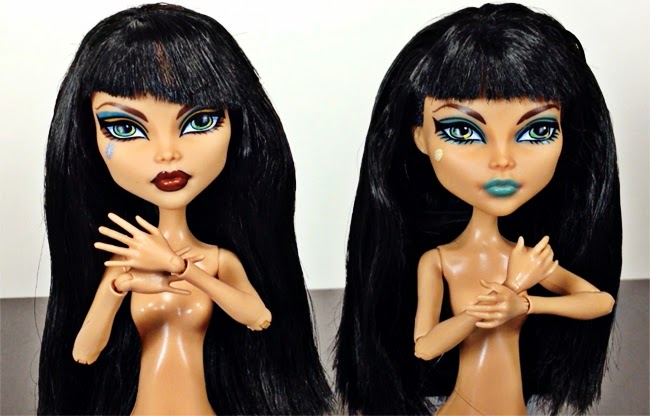 All done and they look FABULOUS!

And on an unrelated topic, look how different their hands are. I'm guessing the more closed one is a first line release. Sweet."
Posted by Muff at 8:55 PM 31 comments: