Ever After High's Cerise Hood

I am not really a fan of the previously released Ever After ladies (those clothes, those heads; meh). However, once the price goes down, way down, I intended to get the 2 pack that has the male huntsman in it because I thought he was interesting and I would have used the lady for her articulated body. Then I saw Cerise at Walmart. 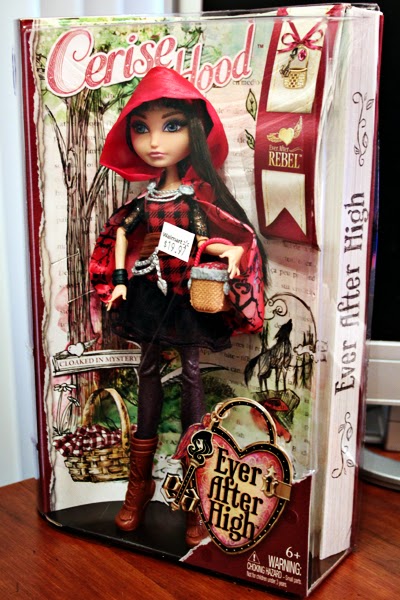 She is not actually posed like this in the original packaging. I had deboxed her before taking a photo so I stuck her back in. And yes, I actually paid the full price of $19.97 for this doll. Shocking, I know, but I just found her outfit rather cool and I wanted it, and I wanted it now. It's got this urban, tartan, goth feel and I dig it. 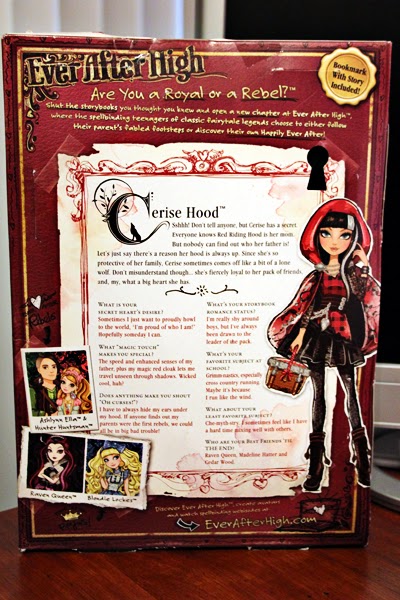 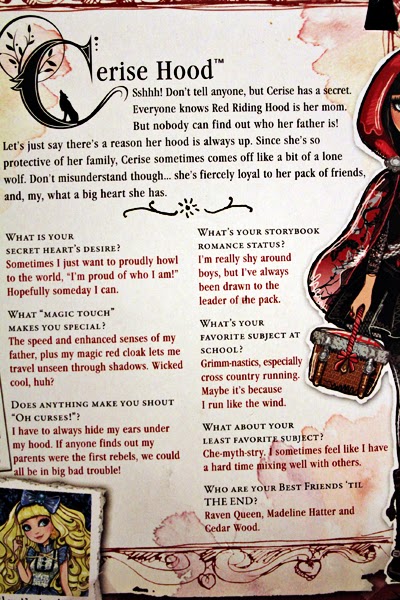 Her story is another thing that intrigued me, but it also misled me. Based on this story I thought she was hiding wolf ears under her hood. She is, but they are the mildest wolf ears ever. They just have a slight point. Not even a Vulcan point at that. I'm not loving her face, even though it's nice and melancholy, but, if she would have had actual wolf ears, ala Clawdeen, then I might have found her head more appealing. 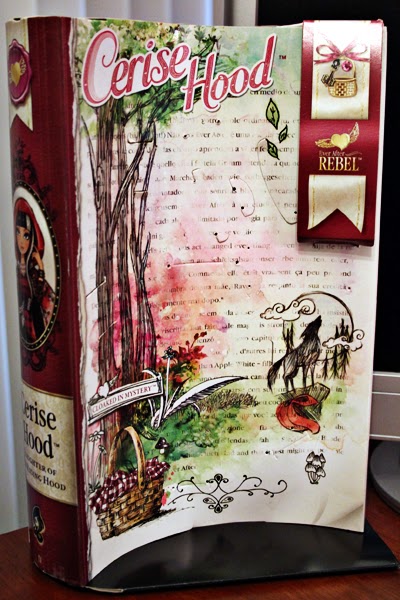 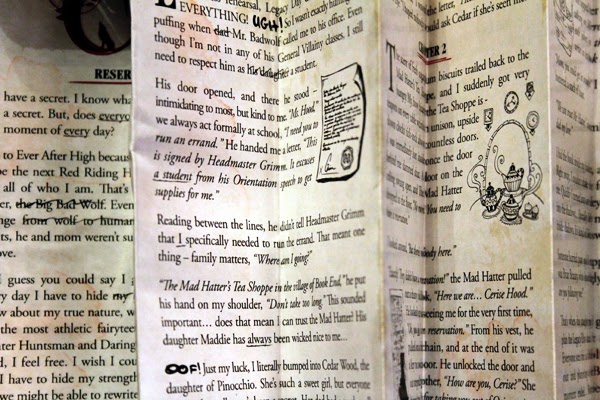 The story inside of her Bookmark 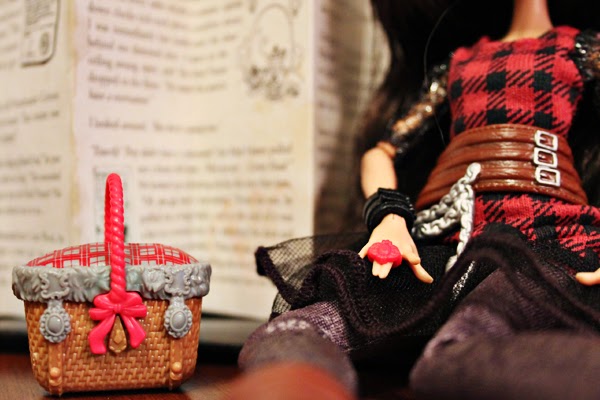 Her accessories. That ring falls off easily. 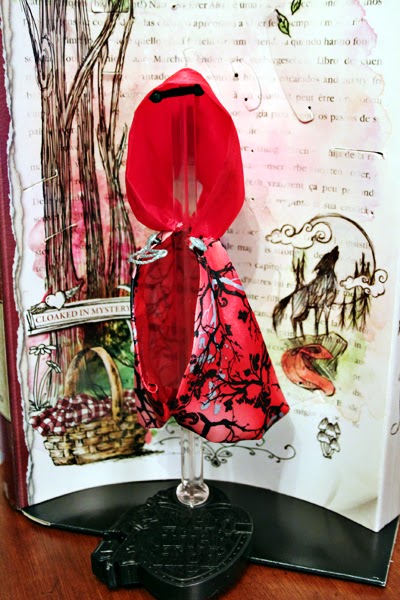 Her cape is put together pretty well. 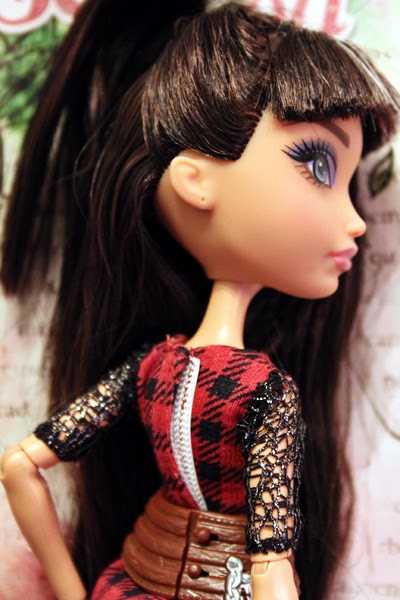 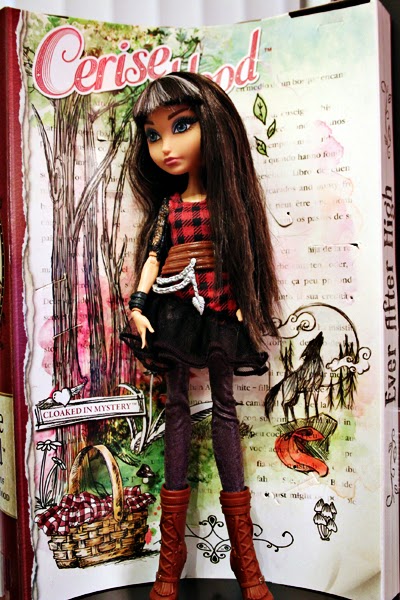 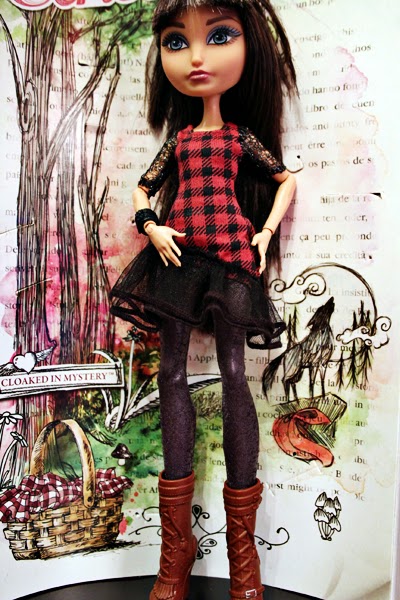 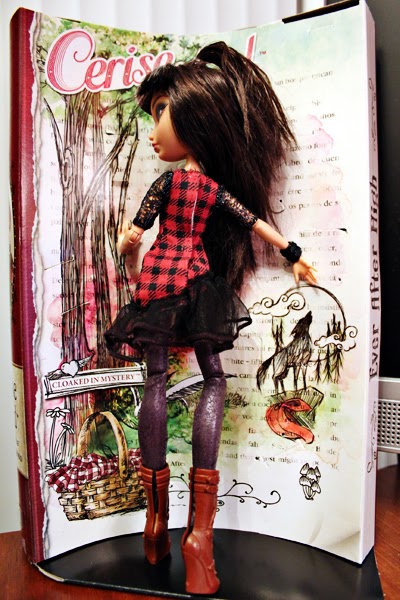 The outfit is so very well made and the materials are lush. I'm impressed with the quality, the cut, the sewing; everything. Some better detail could have been added to her boots but that's minor to me and I'll add it myself anyway.

One thing I learned is that unlike Monster High bodies, the Ever After bodies are a near perfect fit for Disney heads. I don't know why though, because the knobs and neck bulbs look the same to me. Guess they aren't though. 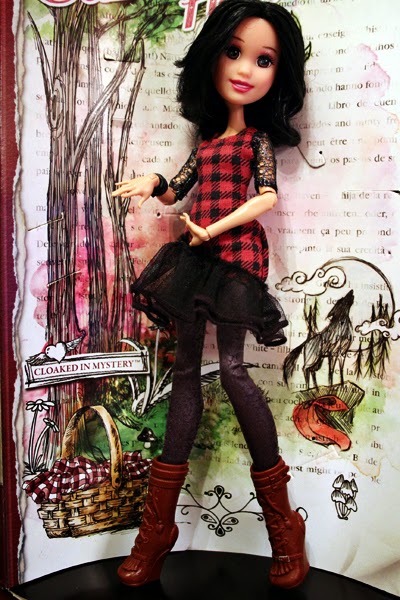 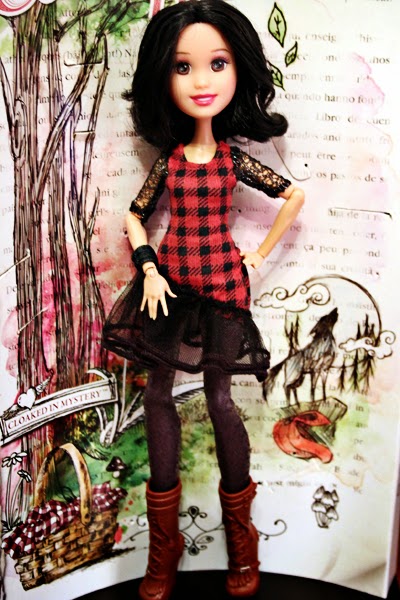 I plan to shrink Cerise's head and if it doesn't get as small as I would like, and I doubt it will, then I'm giving her body to this thrift store Snow. I have always intended to repaint and turn this Snow into a Neemo [visit Heather's blog for more on Neemo's]. However, this is my first time finding a smaller articulated body that Snow didn't bobble head on. I will shrink Snow's head down more, but even without doing that, like I said, it's a darn good fit.

I surprised myself paying full price without breaking a sweat, but there must have been a full moon or something swaying my usual cheapness. I'm not paying full price for those Barbie Style dolls though - I'm still mad about that.
Posted by Muff at 2:24 AM 43 comments: