I saw these playsets at Big Lots and even though they have what I've seen people refer to as "clone dolls," I thought they were rather interesting.  They were each $10 and come with a doll, outfit and themed mall kiosk set. 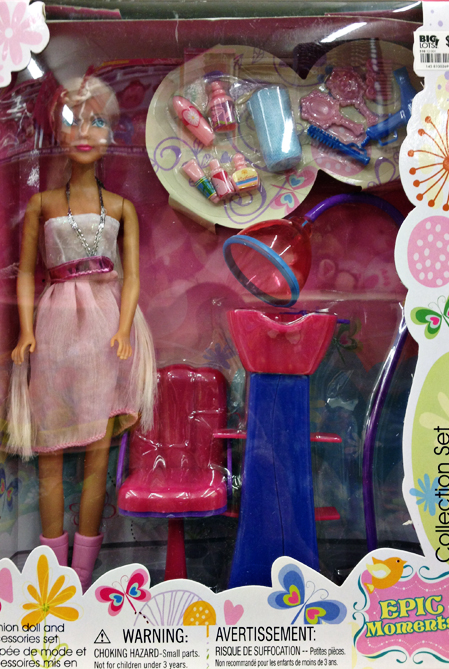 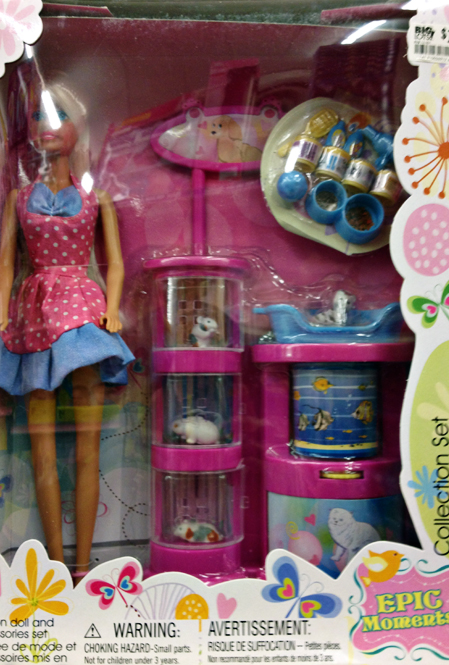 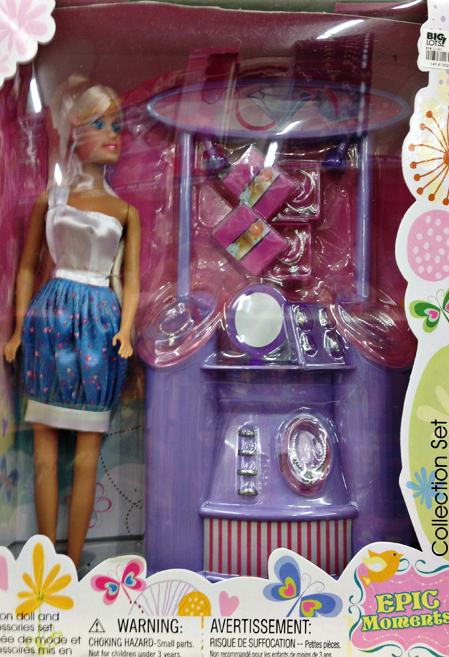 Yes, they all look incredibly cheap, but frankly, they are not that far off from what Mattel has been putting out lately at double or triple the price. 0_o  Since there was a 20% off sale and I was curious about the quality, I took one home.  I got... 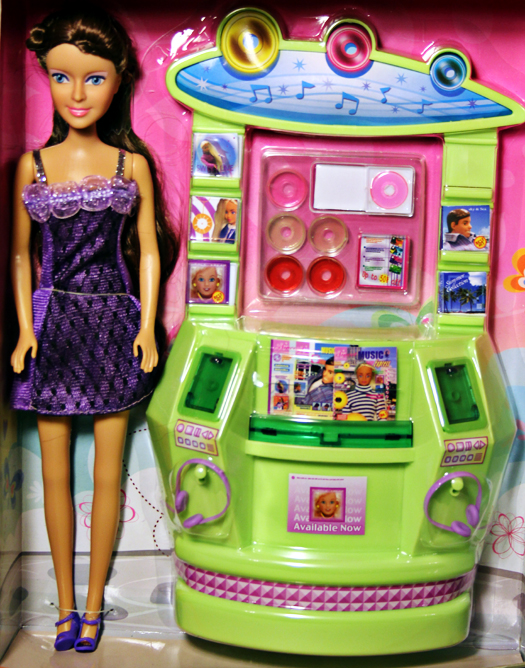 I have seen various playsets of the other themes, but never a music centre, so this one really caught my fancy.  Be careful if you get this one though because in the store I noticed some CDs missing from one of the boxes.  Note how on the top right side there is one blank space where a CD would go and it's actually included in the middle along with discs.  However, one of the boxes I saw had 3 blank spaces on the right side and since the set itself is glued down I could tell that they hadn't just fallen out, but were gone. 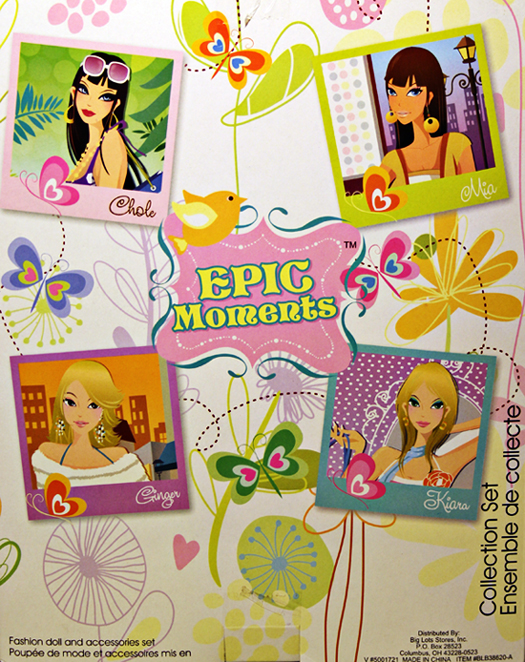 The graphics on the back are great. I'm keeping this panel to add to my collection of packaging art.  I would like to have dolls that look like this artwork! 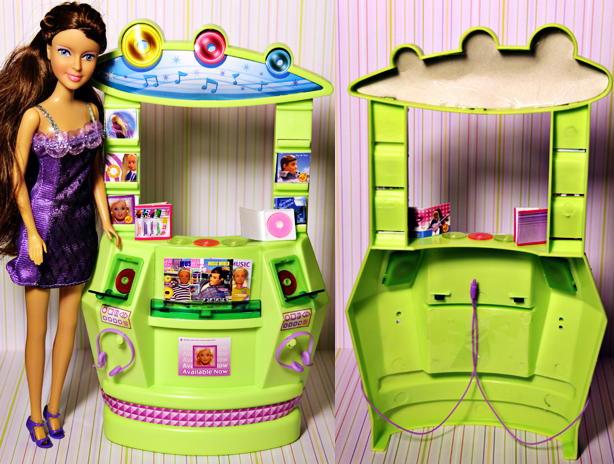 The plug on the headphones is taped to the back of the set.  There is a hole underneath the headphone hook where you can insert the plug. Because the wire of the phones is very stiff I'm just going to leave it back there for storage because once you start playing with it I bet it wont wrap back around again so neatly.

The included doll is the same size as a regular playline Barbie. Compared to a $5 Barbie that has the same un-movable neck nob, there are a few differences.  The clone has a nice swivel waist, however, her legs cant open unless she is seated.  They both have arms that just go up and around with no outward movement.

I think this set works best with a teen body instead of an adult and I wanted it to be a kiosk that could have a worker standing behind it.  The Bratz body is perfect, but the Monster is a little too tall.  The Monster also cant place her hands on the counter top without bending over at which point she hits her head.  If you use a real Bratz head on the Bratz body then her eyes and half of her forehead will clear the opening. 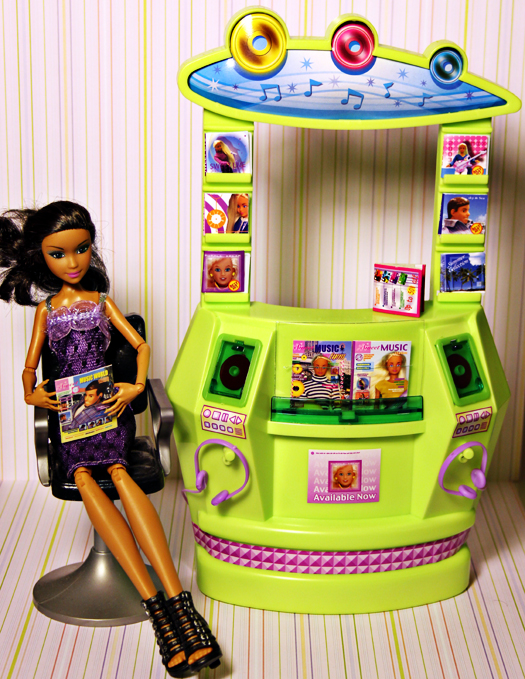 The Monster would have to sit to man this booth. 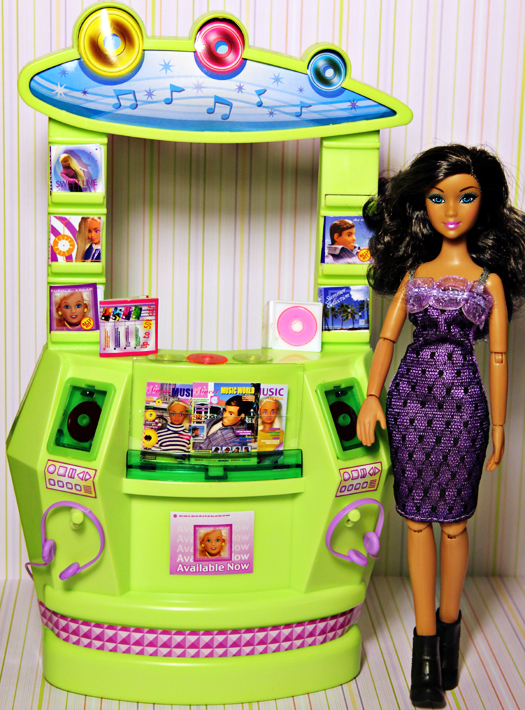 The Bratz body is perfection. If I could tolerate sewing I would modify this dress to fit her, 'cause it looks adorable on her. I have to say that the quality of the dress is no different than the $3 half print dresses Mattel produces. 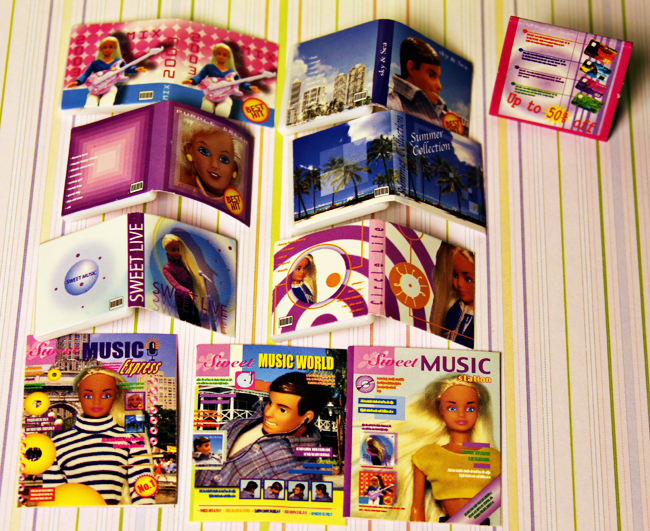 A look at the awesome CDs and magazines you are selling!

Considering I paid $8 for this, which I really didn't want to, I kinda think it's worth 10 bucks.  Yes, the kiosk is made of the thinnest plastic and the doll is questionable, but c'mon, overall, everything is hecka cute!  To be so cheaply made they put a lot of detail into this.  Would I go back and pay $8 or even $10 for the other sets?  Ehhhh, probably not, but only because I already have a Salon and a Jewelry kiosk and I don't like Pet Boutiques.  If they were $5 though, I'd snap them all up, regardless.

I know my last posts have all been, BUY BUY BOUGHT, but that's because it's my busy season at work.  While I have time to stop and pick up something and snap some pics, I don't have the creative craft time I would like.  So, I'm making do with finding cute, inexpensive stuff to play with and satisfy my cravings. ^_^
Posted by Muff at 4:00 AM 55 comments: