Still 2 months ago.
Tasha is completely moved into 227N.
She and Kevin work on some finishing touches.
While Anthony works on being annoying.
Tasha sets up her gaming system as Kevin hangs up a decoration. Anthony, helpful as ever, decides his best course of action is to fill his belly while commenting on their work. "Did you connect that right?" He asks Tasha while maintaining a hold on his pizza.
Kevin asks a question of his own. "Why don't you stop eating and give us a hand here?"
With fried rice firmly in his grasp, Anthony responds, "You have your priorities and I have mine."
"Yeah, your stomach!" Tasha grumbles out.
Kevin is teaching Tasha proper fire place maintenance when Anthony wonders aloud, "You know what you're doing?"
"Just drink your soda."
"Pfft, fine with me."
The hard workers finally stop and rest and ask Anthony about his upcoming military training. Kevin wants to know, "You gonna be gone long this time?" While Tasha's concern is, "And should we be worried?"
"No worries necessary, kid and I'll be back before you know it."
It's time for Anthony to head out and Kevin gives him a handshake. "Thanks for the assist, man."
"You know I got you." Turning to Tasha, Anthony demands, "Gimmie a hug, twerp." She readily complies. "Give my boy a chance, alright?"
Kevin silently gasps at his words while Tasha pulls back in surprise. "Huh? Give who what?"
Kevin inwardly steams, "Oh, this jerk."
Knowing he'd sufficiently riled them both, Anthony leaves with a parting shot. "Just remember what I said. Later!"
"Okaaaay," Tasha drawled, "What was that about?"
"Heh, who knows?" Kevin lied nervously. "You look really tired. Why don't you..."
"Nope. Stop right there."
"Stop what? I was just gonna..."
"Forget it, mister. Something is going on. So please just tell me already," Tasha implored.
Kevin sighs, "You're right. Have a seat and I'll get us a drink."

Because he's taking an obviously long time to choose a drink, Tasha suspiciously asks, "Are you stalling over there or what?"
Finally returning with sodas, he hands one to her. "No more stalling. Here."
"Thanks."
Kevin begins, "Do you remember when we first met?"
"Of course!" Tasha exclaims. "I was a sweet, shy 5 year old and you were a slightly smelly 11 year old with a very funky attitude." She reminisces the event.
Tasha's mother tries to introduce the 5 year old to her new brother. "It's okay, baby. Say hello." Turning her face into her mother's leg, young Tasha thinks, "I'm too shy," and refuses to speak.

Back in the real world, Kevin scoffs, "Heh. I love how you rewrite history. Sweet and shy? Please." Kevin recalls the meeting more accurately.

"Mama says you're my brother now. My friend Nina say lil' brothers are sucky," Young Tasha laments.
"Tasha!" Her mother sharply reprimands.
"Sorry. But you're big so I guess it's okay," Tiny Tasha reasons and then motions to Kevin, "You can pick me up now!" Secured in his arms she sniffs him noisily. "You smell funny."
"Tasha!"
"Sorry. But I'll get used to it."

Memory over, adult Kevin agrees that, "You were right about the attitude though. Dad and I never got along. When he introduced you guys and declared we were a family - let's just say I didn't take it well. I tried real hard to resent you and your mom but you both worked your way into my heart."
"Awww. Same here, Kevin."
"Maybe not quite the same."
"Huh?" Tasha leans back. "What do you mean?"
"This will be hard for you to understand and it's just as hard for me to say, but please hear me out."
Tasha silently nods.
"I, uh...," Kevin starts. "The thing is..." He stops. "I'm....," He pauses.
Seeing him struggle, Tasha soothes, "Kevin, it's okay. I think I know what you want you want to say."
"You do?!" He exclaims surprised.
"Uh huh. I've suspected for a long time that... that you're gay! And that's totally okay."
"Whoa, what?! No, I'm not! Why would you even... What?!"
"Oh, Kevin." She says wryly and thinks, "It's just so obvious." She begins to list the reasons for her suspicion. "You haven't had a girlfriend in forever. You only hang around other dudes. You're always at the gym. I mean, always," she stresses.
Kevin hangs his head. "Oh geeze. This isn't happening."
Feeling she's 100% right Tasha insists, "You can admit it. You know I'll support you." Getting an idea in her head she loudly gasps, "Oh! Have you met someone special? Is that why you're coming out? Awww. That's so sweet!"
"Tasha," Kevin implored solemnly. "Listen to me. I'm not gay and I'm not in love with some dude." With a slight pause he powers through. "I am in love though." Gently raising a hand to her face he finishes, "I'm in love with you."
Tasha blinks at him momentarily, positive she'd heard him wrong. Pushing his hand away from her cheek she softly says, "Uhm. You..." She starts again and simply queries. "Say what?"

Disney Royal Sets 50% Off at Target

I have been keeping a watchful eye on the Disney sets since Adrian and Dana blogged about them 3 months ago. Originally $14.99, last week they were 30% off and I was like, "Nope. Not low enough." I planned to wait until they went to 75% but the stock was a little low so I figured I'd get the ones I really wanted now and if any make it to 75% I'll grab more. 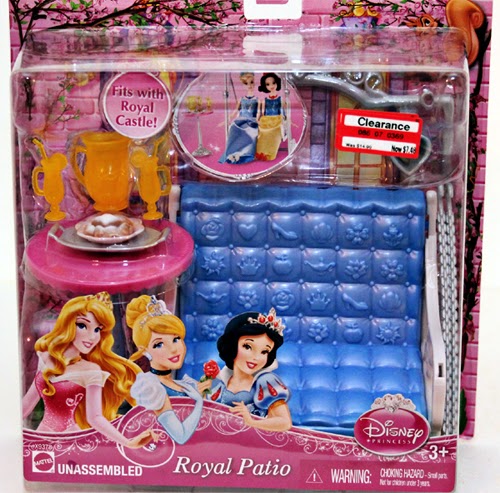 The Target I went to only had one of these, but if I find it lower priced I will get another one, more for the bistro table than the patio. I might have to fill that patio with modeling paste or cover it with a cushion. 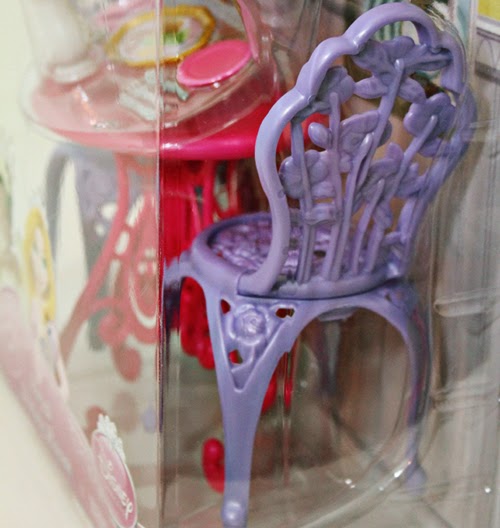 I got two of these and wouldn't mind a few more actually. I'm not the roses type, but those are some sturdy looking chairs and I like all the pieces overall. 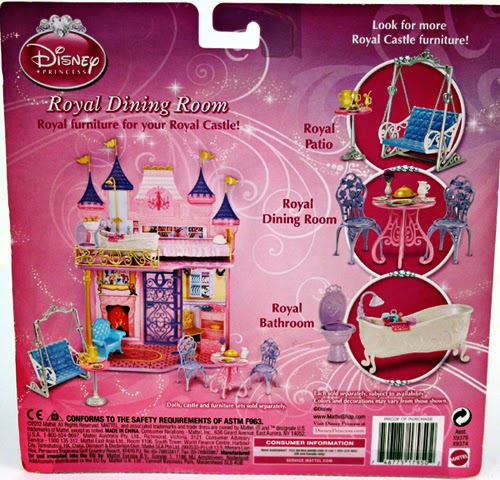 They had the bathroom set but that's one I'm willing to chance it getting to 75%. They also had the Royal Castle but it was not on sale and if I recall it was $39.99. Ah NOPE! 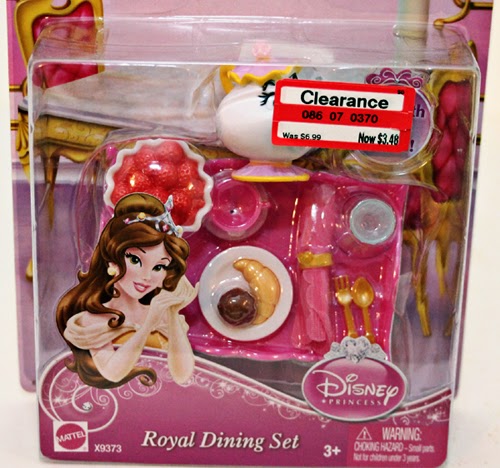 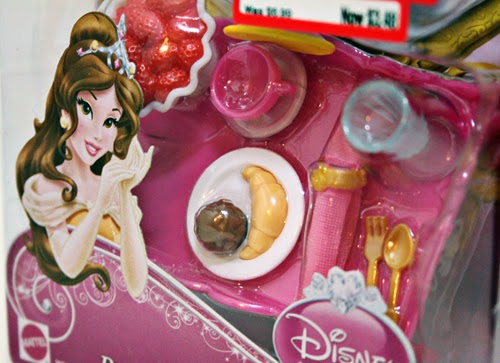 I got two of these as well. The utensils in all Disney sets are really too small, but every thing else is okay scale wise. Look at that nice detailing on the strawberries. The croissant and muffin are welded in place but still look okay to me. They had a bunch of the Disney Vanity in Adrian's post so that was another one I'm going to take a chance on.

I will want to change the color of all the furniture, but for the price, it's worth the hassle.
Posted by Muff at 1:30 AM 28 comments: 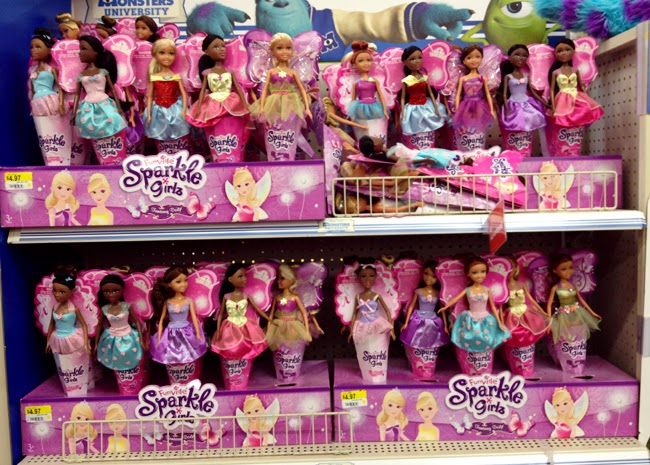 I was travelling all weekend and came across a Walmart that was selling dolls that my local stores don't carry. Well, I haven't been to my local ones in a while so maybe they do and I just don't know it yet. They are called the Sparkle Girlz - and don't get me started on this insistence to add "z" to the end of everything. Moxie Girlz, Bratz, Just Dreamz - enough. 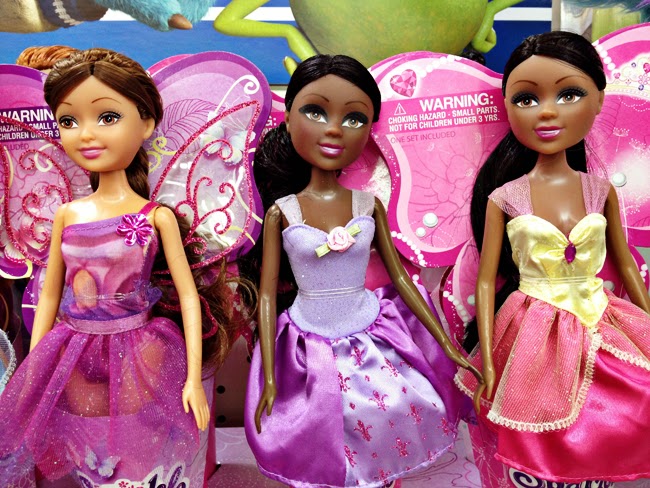 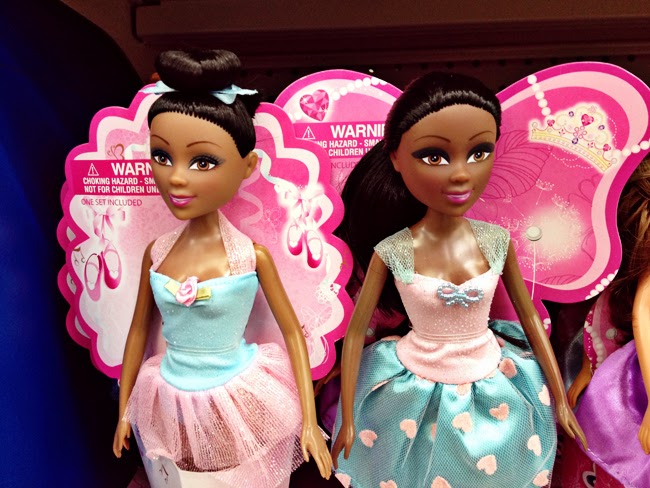 I was pressed for time so I didn't fiddle with them as much as I wanted to, but I dunno, I think they are rather cute. They are very similar in production to the $5.00 Monster High clones you can get at Family Dollar. Could be the same company for all I know because I didn't check the back of the box. While I think there is a definite market for these dolls and the price is good, I still didn't buy one and probably wont. I just like that they are available.
Posted by Muff at 2:21 AM 33 comments: