The thrift store closest to me has a huge bin of stuffed animals, a long row of Tonka type/Baby thingies and a single shelf of those fussy, antiquey type demon dolls.  I call them demon dolls because they are always evil in the movies.  Anyhow, they NEVER have any Barbie or 1/6 dolls.  I finally asked the sales lady do they just not get them, do they throw them out or do they sell super fast or what?  She said they don't get them that often but if they do they pack them all in a single box and sell them as a bulk item. 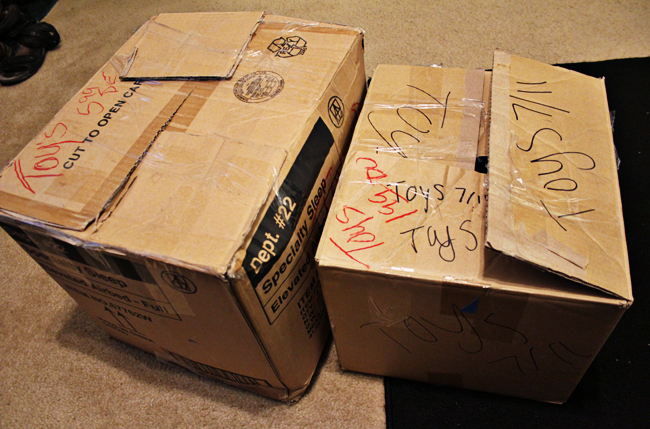 She showed me these two boxes that were off in a corner that was no where near the toy section.  When I saw they were taped up I asked her to open them and she said she couldn't, that they were sold as is.  I was like, "Whuuuut?! Are you serious?!"  I thought that was totally ridiculous, but as you can see, I bought them, lol.

Since the boxes said "toys" and not "dolls," I figured there were no dolls inside.  At first, I walked away with a "puh-lease," but then, I just got SO curious.  They were only $1.99 and $5.99 plus 20% off since it was Sunday.  I thought, "What the heck? If I don't like what's in them I'll just bring them back and they can sell them to some other schmo." 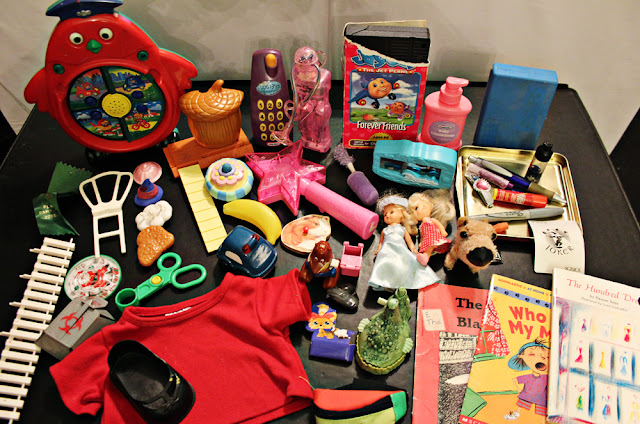 Click photo for a larger image
The Contents of Box #1: Rejection Pile
These are the items I know I don't want at all.  There was used chapstick in there! OMG, gross!  A ball point pen.  A single joker from a deck of cards.  ONE SHOE?!  Really, now? 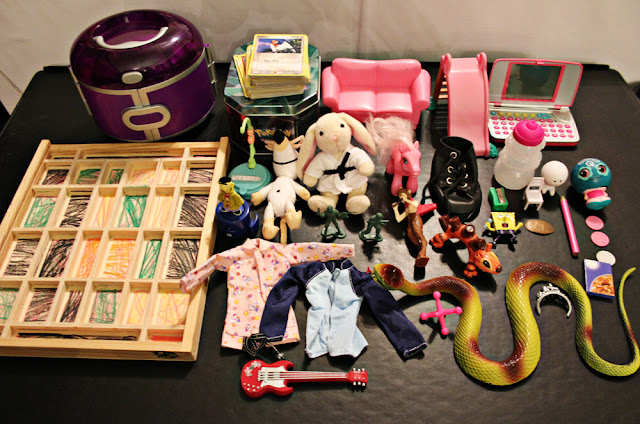 Click photo for a larger image
The Contents of Box #1: These Things Interest Me Pile
I may not keep some of these items but they got my attention as I was divvying up the box.  Pokemon cards, red guitar, karate rabbit and awesome snake!  That's worth $1.99 right there!  I'll paint that wood box and probably turn that baby shoe into a doll vest.  I had to go online to find out what that purple container was.  Mine is totally empty but filled it looks like this: 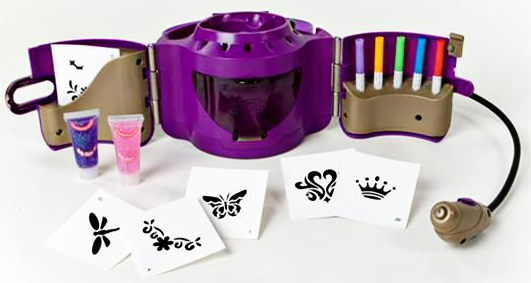 Internet photo
It's called a Girl Crush Airbrush Tattoo something or other.  I'm sure I can break it down and use the pieces for a future dio.

I'm going to wait awhile before I look in Box #2.  Dunno why, but I just like having it as a sweet surprise that I can be curious about but can open when I feel like it.
Posted by Muff at 4:33 AM